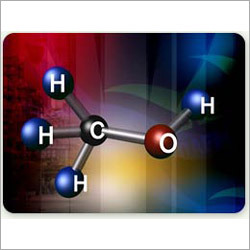 We have been able to attain strong market goodwill as a trusted organization, engaged in offering our clients Methanol. At our sound processing unit, we process this chemical using best quality compounds. This chemical is mixed with water and injected into high performance diesel engines. Methanol is widely used in paint, pharmaceutical, paint and chemical industry. We make available this chemical for clients in different quantity packaging options and at reasonable prices.

It is also used as common laboratory solvent and is suitable for :

Methanol is mixed with water and injected into high performance diesel engines for an increase of power and a decrease in exhaust gas temperature. This is called water methanol injection.

Methanol (CH3OH)  is a chemical which is clear,  light, colorless, volatile, flammable liquid. Methanol was earlier acquired as a decomposition of wood and now it is produced through a catalytic process utilizing carbon dioxide, carbon monoxide and hydrogen.

Methanol is widely used as a laboratory solvent, HPLC, UV/VIS spectroscopy and LCMS owing to its low UV cutoff.

Methanol is used as fuel in internal combustion engines. Apart from this, Methanol is also used in  Champcars, USAC sprint cars, Monster Trucks and in other dirt track series.

Methanol is also widely used as an oxidizer with followings to form formaldehyde:

Methanol is also known as  methylated spirit and used as a traditional denaturant for ethanol.
Used as a solvent
Used as an antifreeze in pipelines and wind shield washer fluid.
Used in waste water treatment plants for providing a food source of carbon for the denitrifying bacteria.
Used as an automobile coolant antifreeze
In polyacrylamide gel electrophoresis, Methanol is used as a denaturing agent.
It is used in camping and boating stoves as fuel.